Context : The first settlers – a coloured man and his wife – settled on this land in 1986. Since they were “scared of living alone” – as they put it – they invited other people to join them. In the early years, the new settlers were continually harassed, especially the women, who were vulnerable to attacks on their way to the main water sources. In subsequent years, the settlement grew to a sizable settlement of 389 residents living in more than 200 shacks. The land is privately owned; one part by the Kwa-Zulu Natal Provincial Department of Human Settlements and another part by a private owner. Havelock is built against a hill and the shack density is high. 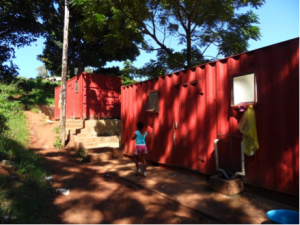 Recently, the Municipality placed two containers with toilets in the settlement. The settlement has been earmarked for “interim services”, a term used by eThekwini to indicate the willingness of delivering basic services in the short term, and generally in favour of long term habitation and development.

The Havelock settlement has been one of the key actors in the frequent dialogues with the eThekwini metro, as arranged by the Informal Settlement Network (ISN). At these dialogues, the community has raised their concerns of high densities and low levels of services. The high densities have been a conducive environment of shack fires and flooding, and shacks closer to a water stream have struggled with the torrents of water flushes in the rain seasons.

Impact: During May to June 2012, the settlement conducted an in-depth enumeration of the settlement. After extensive mobilization, the leadership from Havelock was invited to meeting in Mayville where they heard about the saving scheme and advice and solutions on how ISN methods can offer assistance to communities. This strengthened the relationship between the community and ISN. Workshops were hosted to train community-based enumerators in understanding the questionnaire, and thereafter, capturing the data on CORC provided computers. The initiation of the enumeration exercise saw the establishment of four teams: a data collection, a numbering team, a measuring team and a mapping team. Through the 10 to 15 minutes interviews, the enumerators took the opportunity to mobilise more community members who were not aware of this initiative. Before the data collection started all the shacks in Havelock were numbered chronologically from HV001 to HV215.

The data was captured, and returned to the community where the dataset was verified. Moreover, the dataset was spatially referenced via Geographical Information System (GIS). The results were presented to the eThekwini metro. Click here to view the enumeration report. 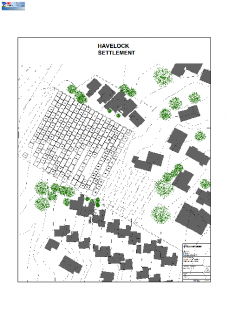 The enumeration data was the starting point of negotiations towards incremental upgrading of the settlement. To successfully initiate the upgrading process in Havelock, volunteers from the community mapped the settlement and have constructed two scaled models: 1.) the existing pattern of the settlement, and 2) a possible layout for reblocking. Individual shacks are cut out of cardboard on scale to be used in the scale model. The technical team responsible for making the scale model was supported by experienced ISN members from Cape Town and worked for a period of four days in Havelock.

The reblocking proposals have stirred a bottom-up “re-dreaming” of many settlements in Ward 22. Together with Kwa-Mathambo, the possiblities of in-situ upgrading is beginning to impact the way communities frame their development aspirations. The momentum of these two diverse settlements – one deemed to be fit for upgrading (Havelock), and one destined (in the mind of officials) for relocation (Kwa-Mathambo) – have stirred dialogue in the ward, and the councillor is often lobbied with requests for ISN meetings. The prospects of unlocking the partnership with eThekwini are now in sight, as communities now have a concrete upgrading strategy in which to channel their energy and lobbying. The metro has indicated a desire to provide more ablusion blocks too, and the success of the re-blocking project could have a considerable impact in the way upgrading is conceptualised in Durban and beyond.

Project Description: The actual reblocking project is yet to start. Please revisit this section as it will be continually updated once upgrading starts. 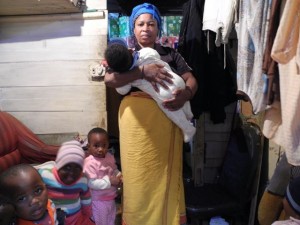 Objectives: The objectives of the in-situ upgrading of Havelock are two fold: 1) to address the problems of overcrowding, which is a conducise environment for runaway shack fires and flooding, and 2) to create a precedence in the eThewkini metro and demonstrate the effectiveness of people-driven development.

Projected Outcomes: To improve living conditions in Havelock settlement, and to create a precedence in people-centered upgrading in eThekwini.

Constraints: As communities are the seeing the potentials of the reblocking programme, they are requesting ISN for similar assistance. However, due to resource constraints and funding constraints (currently CORC subsidises 80% of the new materials in the roll-out of reblocking projects. However, this does not restrain ISN to continue mobilizing communities around commonly-faced issues. The ISN’s ambitious attempt to profile all informal settlements in the metropolitan area is creating a significant bottom-up mass.