Mariel Zimmermann (on behalf of CORC)

“Large mines in the Free State are falling on hard times. Subsequently, our Federation members are complaining that it is now difficult to find employment in the mining sector. Historically, some of our members have used mining as a significant source of income. This is difficult since some of these mines are now closing. This development particularly affects the younger population, as their options to earn a living are even more limited.” – Lebohang Moholo (Savings Facilitator of the Federation in Free State)

Against this background, the Federation of the Rural and Urban Poor (FEDUP) in the Free State is exploring new ground – generating income through cultivating farmland. Agriculture offers an opportunity to create employment and to “keep the youth busy”, as Lebohang puts it. This approach aims to both reduce crime and counteract the negative consequences of the economic downturn that often affects the most vulnerable people in society. 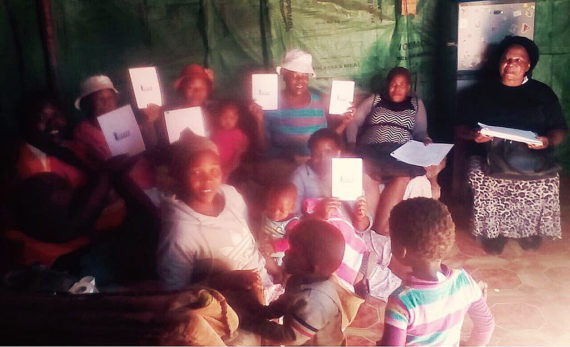 Income as a result of partnership: how FEDUP engaged Nala Municipality

FEDUP identified farmland in Wesselsbron (a farming town south of Bothaville), which is owned by the municipality and has been unused for years. FEDUP approached the officials with the proposal of an agricultural development project. Negotiations around an agreement with Nala Local Municipality (NLM) started in 2016. FEDUP wanted to provide the community with agricultural land to plough grain products, vegetables and dairy as well as technical knowledge and through agriculture create alternative sources of income.

In a first step, members of the Federations held a presentation about their activities and engagements to the municipality. This space was also used to introduce the Federation’s intention to launch agricultural development project. As the identified land has been cultivated by another community, which had left years ago, the municipality first needed to check with the leadership of that former community whether the land could be used or not. Having received this approval, FEDUP and different departments of the municipality met again for numerous times to discuss and to clarify the details of the arrangement.

On 26 May 2017, a Memorandum of Agreement (MoA) between FEDUP and Nala Local Municipality was signed. In this MoA the municipality would lease 20 hectares of unused farmland to the Federation free of charge from June 2017 to June 2020. NLM would also assist FEDUP by providing expert knowledge, as officials with agricultural expertise would help to train community members.

Lebohang describes the process of partnering with the municipality “as a long journey, which needed a high level of perseverance. It took about a year to make that agreement. We [FEDUP] went to projects officials, councillors and agricultural officials. Finally, we received the land.”

Even though the agricultural partnership took a long time, Lebohang describes it as a smooth process without any considerable challenges.

“The reason for that lies in the good relationship we have established with them [the government] over the time. We first built a relationship with them via land – we had meetings with them, we invited the councillors to our meetings and we also attend their meetings.”

Lebohang refers to a PHP project (People’s Housing Process) in Bothaville where FEDUP and Nala Local Municipality were jointly engaged in the construction of 50 houses. By building on the existing relationship, FEDUP managed to engage NLM around agriculture.

What does it take to make the MoA work on the ground?

Even though the agreement was signed nearly a year ago, the actual cultivation of the land has not started yet. The delay is due to extremely hard soil conditions because the land lay fallow for several years, which meant that the Federation members were not able to plant their vegetables. The delay is also due to a delay in technical skills training, without which the Federation does not want to start cultivating the land. Mama Emily (Regional Coordinator of the Federation in Free State) reflects,

“We want to do it correctly and this from the beginning. Our relationship with the municipality is mixed – sometimes it is good, sometimes it is bad. When it comes to meeting, the officials were always available. However, when it comes to decision-making it is very hard. They tell us that they will make a plan and that they will get back to us. But they do not. As soon as they have to provide something, it does often not happen or takes a long time.”

In order to see movement on the ground, the Federation is including youth in their negotiations with officials.

“We want to involve them in the development of the project, we want to have their opinion and actually we want to give them the ball. We hope this approach helps to speed up skills training and project implementation, as the municipality has identified youth engagement as a clear priority.”

In addition, the Federation currently negotiates with an external professional that works in the agricultural field for assistance in terms of technical knowledge and equipment, so that Federation members do not need to wait for government for skills training.

When reflecting on the past year of negotiating and exploring this new ground, one aspect becomes particularly evident for the Federation: when existing and established relationships are taken care of, they can offer a good foundation to build on over time:

“It is vital that each of us [FEDUP and the municipality] understands how the other works. This helps with negotiating and prevents misunderstandings. We also need to do our research – in particular on planned projects”.

Because of the agreement with Nala Local Municipality, 32 people heard about the work of FEDUP and joined a savings scheme called Kopano Ke Matla – Unity Is Strength. How true this is, especially when poor residents engage their municipalities.