SA and Zim Federations reach out to Botswana

Home » SA and Zim Federations reach out to Botswana

By Kwanele Sibanda (on behalf of CORC)

The Republic of Botswana is a landlocked country located in Southern Africa. It is bordered by South Africa, Namibia and Zimbabwe. It is a mid-sized country of just over two million people. Environmentally, Botswana faces two major problems: drought and desertification. Despite its middle-income status, Botswana continues to grapple with significant social challenges including unequal distribution of wealth, high levels of poverty, unemployment and HIV/AIDS prevalence. On health issues, the prevalence of HIV/AIDS was estimated at 24% for adults in 2006. In the fight against the disease the government of Botswana solicited outside help in fighting HIV/AIDS and received early support from the Bill and Melinda Gates Foundation.

Between 16 – 19 October, South African and Zimbabwean federations associated to Shack / Slum Dwellers International (SDI) reached out to the young and emerging Botswana federation. The federation of Botswana was initially mobilized by the Zimbabwean federation and established in 2011 in Francistown as a community based organisation, which has since expanded to Gaborone, Selibe, Maun and Phikwe. The NGO called Trust for Community Initiatives (TFCI) was registered on the 31st of May 2012 as a non profit trust. The NGO is currently staffed 2 full time staff members and 3 board members oversee governance.

This exchange was in the making for a few months. Following the nomination in Francistown where the Botswana federation was mentioned for best practices in fighting poverty in June 2014, the Minister of Local Government and Rural Development (Peter L. Siele) requested a meeting with the federation in Francistown on 17 October 2014. Since the Botswana federation is still at its early stages of development, it requested the support of the Zimbabwean and the South African federations. The Minister witnessed three projects that the federation members do: traditional attires and baskets, poultry and a cool drink making business. The minister and his team were taken around while the project leaders explained how the businesses are conducted. 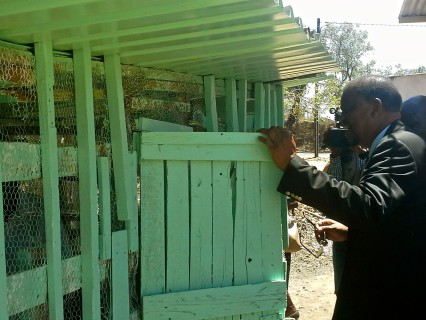 On the morning of the 17th, prior to the commencement of the meeting with the Honourable Minister, a brief planning session was held with the hosts to look into the program and also strategize on key objectives intended to be achieved from the exchange. During the planning session the Zimbabwean and South African delegates were encouraged to focus their presentation more on savings, partnerships and projects. The meeting on 17 October was attended by:

The Botswana Federation outlined the growth of the movement over the past three years, expanding their reach from Francistown to Selibe, Phikwe, Gaborone and Maun. 42 saving schemes have been established and the total number of active members is 1,126 (1036 females and 90 males). Their total daily savings to date is P (Botswana pula) 257 807.91 (ZAR310,000) and the balance of their Urban Poor Fund is P20 834.85 (ZAR 25,000). Public health is a major focus area for the Federation, and projects have included installation of water taps, electricity and flush toilets. They also have income generating projects such as poultry and catering.

The Zimbabwe federation followed and outlined the work of SDI in Southern Africa. They challenged the minister to meet the Botswana federation’s savings and enter into a partnership agreement. The South African federation spoke about their “pledge” agreement / MoU with the Department of Human Settlements as tool for long term engagement. they argued that to enhance their work so as to support more communities, the government- community partnerships different level to build more than 15 000 quality houses by ourselves for ourselves. In working with the government we always emphasize that the Batho Pele (People First) principle must be applied.

When the Minister of Local Government and Rural Development replied, he addressed the needs of the Botswana federation by outlining some of the programs that different government departments are offering in line with what the federation is doing. He furthermore encouraged them to take advantage of funds such as those offered by the Ministry of Labour and Home Affairs (MLHA). The Women’s Affairs Department is mandated to facilitate mainstreaming of Gender Issues in the development process. As a way of empowering women’s CBOs, the Government of Botswana allocates funds to the Women’s Affairs Department annually in order to assist the organisations.

One member of the exchange reported that,

I am so grateful for the exchange has enlightened me on many federation issues especially the Urban Poor Fund.

We feel motivated by the presentations made by the federations that have been doing the work for many years and we are inspired to grow our federation the same way.

Ongoing support to the Botswana Federation will be focused on getting the Urban Poor Fund up and running. In group sessions, discussions from delegates from Zimbabwe and South Africa were advising on writing key points that relate to UPF in their respective countries. Botswana was on the other hand listing what they have so far been using as principles around UPF. As a way forward it was agreed that a final decision of principles around UPF cannot be taken in the particular meeting because consultation first has to be made from a savings scheme level; however an agreement was reached on what the respective saving schemes have to input towards a final national UPF policy.