By Thandeka Tshabalala (on behalf of CORC)

On Erf 64, located in the neighborhood of Kylemore in Stellenbosch Municipality, a small community has lived on the land since the early 1980s. The site is located on the edge of a picturesque forest. Sarah Klempton first lived here when the site was still used by the Dutch Reformed Church as a Youth Camp in the 1980s. Sarah and her family grew, and relatives joined her, and today the small community of 9 families consisting of 25 people live here. The land is owned by the Department of Public Works and the residents do not have formal land tenure. Sarah and her relatives continue to stay in very old and dilapidated housing stock, which is starting to fall apart. Some of the newer arrivals have used zinc sheets to make extensions to existing structures.

The community has access to basic services such as four chemical toilets, electricity and a water tap in the vicinity. Although there are no street lights in the long approach through vacant land towards Erf 64, the residents find the neighborhood relatively safe. Regular police patrols comfort them. For social support the community relies on religious services as three churches are located within the wider area of Kylemore. The children attend school at the nearest primary and high schools that are located within a walking distance. nearest clinic is a two hour walk, and on top it costs R10.00 taxi fair to travel to the hospital. Emergency services are often out of reach due to the secluded location of Erf 64 in Kylemore. Having realized this, the community has persistently advocated for a road signage –directing emergency services and new visitors to the settlement, from the main Helshoogte Road. 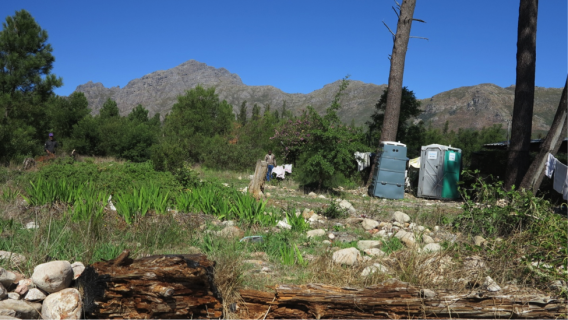 Through the CORC/ISN partnership with the Stellenbosch Municipality, a municipal wide program to upgrade basic services was rolled out early this year. To provide a meaningful platform for community participation, the identification of the projects and their subsequent implementation is rooted within community priorities. Prior to the roll out, the ISN coordinator in Stellenbosch held a series of dialogues with community leaders from the several informal settlements with each community listing its priorities.

To advance towards specific project planning and implementation, the CORC technical team, aided by the ISN visited communities that had expressed urgency in upgrading their settlements. It should be noted that community leadership dynamics play a vital role in determining the speed at which communities take up development projects. The small community of Erf 64 often discusses what their aspirations for the area is. To this end, they have worked in collaboration with CORC/ISN and the Municipality. The technical team from CORC met up the community to discuss their developmental needs and the community prioritized on the following needs. At the same time, Marlene of ISN began engaging the households (targeting the women) on the importance of establishing a saving scheme. 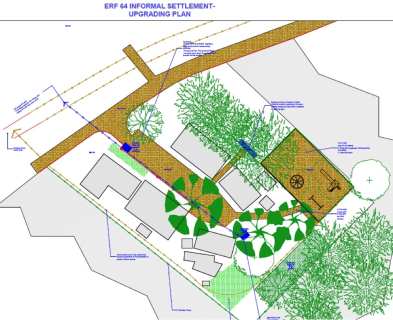 The soil typology is a rough and stony terrain, and surface run off has for a long time eroded the common spaces shared by the community. Consequently, walking became uncomfortable, with the elderly and children being the most affected. The community asked for assistance in improving this surface which covers an approximately 500m2. The site required minor earth works to achieve a fine texture of the surface.

It was identified that there was a need to rehabilitate the existing water point by increasing the water pressure, trap grey water and provide wash basins. So far the additional tap has been fixed. There is an ongoing work of fitting two wash basins and undertaking grey water works- a shallow drain will be used to trap grey water from the water points and reticulate it towards the adjacent storm drain. This drain has infiltration capacity (has grass cover) and environmentally manage the relatively small volume of grey water produced by the 9 households. 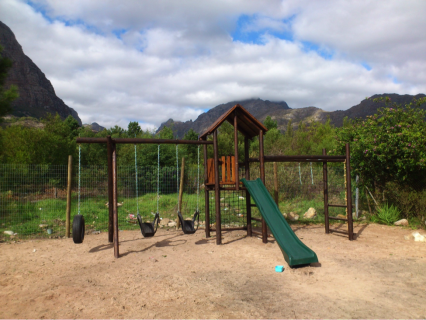 Although there exists a playground at the adjacent high school and which is open to the ERF 64 children, the community saw the need of a play park within their settlement. The reasons for this being that, the children prefer playing within the community but on the rugged surface, often incurring injuries in the process. The parents also expressed the need to have a play park within to limit their worries about children whereabouts. A space was identified within the settlement and through the municipal’s consent works began to prepare the play park site. This was followed by the supply of Play park equipment-jungle gym which was mounted and ready for use by the 21st of June. The planned park includes a jungle gym, and a rotating wheel.

The initiatives highlighted in this article are works-in-progress. In addition the community proposed plan to establish a food garden that will be run as a project under the community savings project. The remaining works of landscaping, water supply and sanitation, and perimeter facing are planned to be completed by the end of July. Importantly, the community resolved to take charge in maintaining the park and wash facilities.