By Tuliza Sindi (on behalf of CORC)

In November, ISN with support from CORC launched a renewed focus on small scale projects funded by the Community Upgrading Finance Facility (CUFF), an Alliance initiative currently housed in uTshani Fund. Marathon and Delport informal settlements were established in 1995 by mineworkers who got evicted from the surrounding mine hostels as a result of the mines closing down. Both these settlements have been grossly neglected in service delivery, and three taps services more than 1,000 people in each of the settlements. here follows an account by an intern architect, Tuliza Sindi, who worked with the community in installing new taps, and upgrading existing ones. Read the account of week one here.

Sipho continues to support the community around conflict resolution emerging from last week’s project initiation. Majola and I drive around the settlement to count the amount of installed and working taps. Ten taps have been installed in the last week, double of what was proposed. However, these were installed without slabs, which complicates the consolidation of wash-up areas around the taps. This is not an unworkable situation. 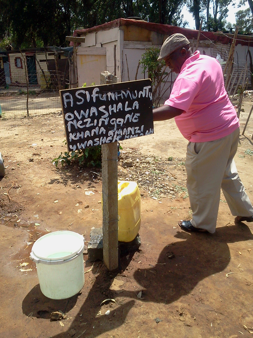 Some of the newly installed and working taps. The sign in the middle image can be seen above one of the new taps. It reads: “Asifuni-muntu owashala nezingane khana amanzi uwashele khaya” meaning that no-one is allowed to let the water run freely, eroding the gravel around the tap. The community should collect water at the tap and take it home. 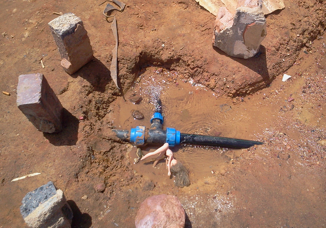 Two of the taps have a low water pressure, caused due to a leaking pipe connection. The tap seemed to have this leak since Saturday and was not fixed over the weekend.

We find 3 washstands built and some pipes placed in the ground. Some dig the trenches while others proceed to build the fourth washstand. The construction team is working well together, and is showing high levels of efficiency.

Sipho, the leadership from Ramaphosa and ISN coordinator, is still mediating the leadership struggle in Marathon. The project is running in serious delays but new leaders are emerging that are willing to by-pass individualistic interests.

As we arrive in Delport, Blanco explains how there is no truck available to bring the heavy loads to the far away taps. This has slowed down the building of slabs significantly. The company bakkie is used to carry sand, cement, water and aggregate to the far taps. They are now able to complete two of the slabs that day.

Blanco loads some sand onto the company bakkie. 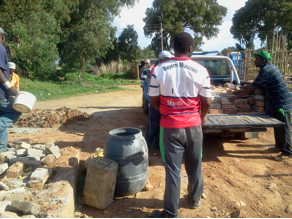 The bricks are loaded off the bakkie.

Even with all the leadership tussles, the community has gone ahead with installing and finishing their second slab and preparing for the third. The community’s unity around project implementation is impressive. 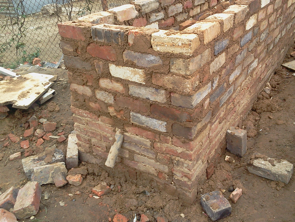 As the supplies arrive, the community construction team plans to finish the slabs in the late afternoon to then commence with some trench digging for the pipes. Due to the excessive distances they expect to finish laying all of the pipes on Sunday. Some pipe connectors need to be changed, due to better paths found and directions changed. Due to this, the project is expected to finish on Tuesday. 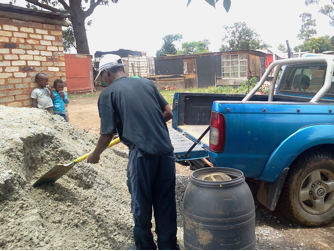 Collecting aggregate for the final washstand.